Marine mammal scientist Dr Vic Cockcroft fears that the “mermaids” he studies may be doomed.

Odysseus ordered his oarsmen to plug their ears with wax and keep rowing, so they would not be lured onto the rocks by the song of the Sirens. Ironically, these wicked daughters of the sea god Phorcys gave their name to the Sirenia – utterly harmless marine mammal species nicknamed “mermaids”. And these sirens are at the mercy of Homo sapiens. Humankind's impact on nature has brought them close to extinction in Africa. According to Dr Vic Cockcroft, evolution can generate amazing diversity given enough time. He said, “If you go back 60 million years, you'll find a fossil ancestor of the Paenungulata – a group which includes dassies, aardvarks, elephants – and believe it or not, sirenians.” He has devoted thirty years of study to these gentle vegetarians. The manatees inhabit the Caribbean and Atlantic shallows, with a preference for freshwater river mouths and estuaries. Some are still found on the west coast of Africa. But Vic's main interest has been their Indo-Pacific cousins the dugongs, who show a tolerance for salt or brackish water.

He told Perspectives, “I'd been working on whales for a decade before I got my first chance to observe dugongs – at Bazaruto in Mozambique. That was in 1991. They look nothing like Hans Christian Andersen's little mermaid, by the way – blimp shaped and up to three metres long, with a rough grey-brownish skin and a fluked horizontal tail. By eating sea grass, they produce a lot of gasses, especially methane, so we think their heavy bones help to ballast

them. The pelvis shows no sign of vestigial rear legs left over by evolution. But the forelimbs have morphed into massive flippers. The heads are blunt, with tiny eyes, bristly mouths and streamlined ear -dimples. The male has tiny tusks; the female has two teats on her chest.”

According to Vic, these fascinating creatures’ surface and take a breath of air roughly every three minutes. Sometimes they stand on their tails in shallows with their snouts poking out of the water – especially females who are giving birth to calves. Their days are spent browsing meadows of flowering sea grasses in coastal waters. Swimming on the surface, they generally cruise at a slow three kilometres per hour. The body mass of a dugong can be as much as 500 kilogrammes – and the daily diet is about 80 kilogrammes of undersea salad. These gregarious animals will congregate in their hundreds if the population is big enough. But now their numbers are shrinking fast. The dugong lifespan is at least 50 years and possibly longer, but they reproduce at a slow rate, which increases their vulnerability. Gestation lasts longer than a year. The mothers take good care of their calves until they are about six years old. They have been observed holding the suckling's head to the breast with a flipper, which has reinforced the “mermaid” legend.

Vic said, “The true origin of the mermaid legend is more complex, and a lot darker than you may imagine. Years ago, I was working on a big population in the Arabian Gulf and spent a lot of time at sea with the local fishermen. When I asked my interpreter, what name the locals gave the dugongs, he told me that their name was 'The Brides of the Sea'. I thought this sounded quite poetic, but the interpreter took the smile off my face by explaining that randy young unmarried fishermen were said to sexually abuse female dugongs. One may speculate that renaissance mariners heard this and passed it on as a legend.”

According to Vic, the battle to save the vulnerable dugong goes on all over the Indo-Pacific region, but he remains focused on a decades-old conservation campaign in Mozambique. Early in the century, he persuaded Sasol to sponsor a head count of dugongs in a national park – the so-called Isles of Paradise – the Bazaruto Archipelago. The verdict was that the mermaids would die out unless immediate action was taken. And if nothing were done, the last viable population in the western Indian Ocean would be gone forever.

At a workshop organised at Maputo in 2009 by the Mozambican National Directorate of Conservation Areas, Vic Cockcroft and his co-workers outlined the need for further study, monitoring, law enforcement, and urgent education of the local residents. He and his colleagues suggested that a national Dugong Management Plan should be drawn up, to prevent deaths, preserve the habitat, and in the longer term – with good luck – to increase the population. No easy task, in a species where females birth only one calf at a time and may not get pregnant again for years.

Vic said, “When we started, there were quite a few hundred dugongs. But by 2020 they are barely holding on – about 300 individuals. A mere handful of their relatives have survived in Madagascar, or so I have been told. The dugongs are at risk every day – the sea grass areas they feed on are shrinking, and chemical pollution from the likes of fertilisers drains off the land. More pollution comes from passing ships, oil rigs and local fishermen, who are encouraged to illegally use gill nets. These are ideal for the shark-fin fishers, but dugongs drown in a matter of minutes when they get entangled. And of course, there is a lot of meat and oil in a dugong, and it's well-nigh impossible to keep an eye on every struggling fisherman who's tempted to spear one if nobody's watching him.”

Currently, Vic works with The Association for Conservation and Protection of Dugongs and Marine Mammal Species. Financial backing comes from the Western Indian Ocean Marine Science Association – as well as the Dugongs and Seagrass Conservation Project. He works mainly out of the Dugong Lodge at Inhassoro, assisted by colleagues such as diver-photographer Fergus Kennedy. 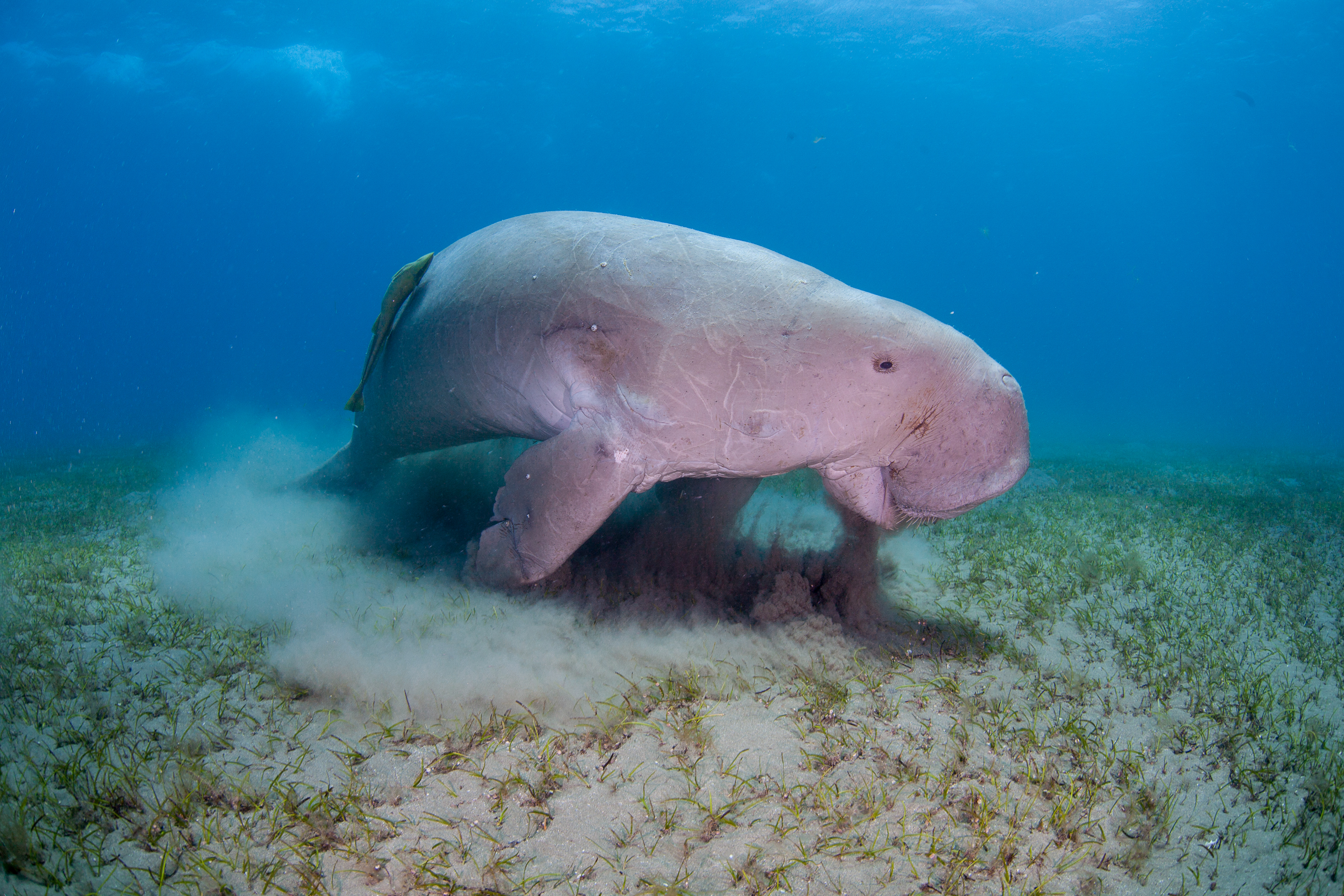 “Our objectives are simple, “Vic told Perspectives. “Using past reported sightings and satellite imagery, we look for what we call 'hot spots' – places with plenty of sea grass. Then we go and talk to the local people. Depending on what they tell us, we use underwater recording devices which can pick up the sounds of browsing dugongs. And this gives us an idea of how many individuals there are in that location. We might try an aerial survey if funds permit. Then, in an attempt to save the dugongs in particular and marine biodiversity in general – we take our conservation message to villagers and the authorities.

“Great tact and patience are required. The official reaction is invariably enthusiastic – but the follow-through might bog down in red tape. Local communities are set in their ways, and tightly focused on their own survival. So, raising awareness is our biggest challenge – to gently persuade the local people that conserving the coastal ecosystem and the dugongs will be to their long-term advantage.”

Vic goes on working at the Isles of Paradise with the 300-odd surviving sirenians. He knows it will take years before there is any sign of an increase in numbers, but the “mermaid man” intends to go on winning hearts and minds over to the dugong's cause. As they say in Mozambique: “The struggle continues.”

QUIRKY
Unconventional laws and where to find them