Humanities vs the Sciences

A debate through the ages

For those of you into your second or third decades in the working world, think back to a point in time during high school when the conversation with parents, and sometimes teachers, was about future study choices and career ambitions.

The debate centred around which university degrees and fields of study had more credibility than others, and would therefore result in the assurance of future success and wealth. There seemed to be a foregone conclusion that a “real” qualification would provide a “real” job – and those would invariably be either doctor, lawyer, auditor or accountant.

A qualification in the sciences was definitely deemed superior, favouring the B.Com over the Bachelor of Arts degrees. During the 1980s and 90s getting a B.Com degree was just a better guarantee of middle class social standing (and one that your parents could boast about to their friends).

For those students with ambitions in the study of humanities: sociology, languages, history and/or anthropology – a BA degree was rarely viewed with the same stature.

Has this always been the case?

It was British scientist and novelist Charles Percy Snow who, in 1959, gave a lecture to the Senate House in Cambridge on his thesis titled “The Two Cultures and the Scientific Revolution”. In this, he proposed that “the intellectual life of the whole of western society” split into sciences and humanities was the major hindrance to solving the world’s problems.

He viewed “The Two Cultures” as a rivalry and strongly denounced the pervasive snobbish and condescending nature of the “arty types” - a completely opposite perspective from the experience of middle class teen angst described above.

Snow argued that conservative British society gave too much status and prestige to subjects in the arts and humanities. He suggested that their relevance was waning in a world gripped with the aftermath and possible recurrence of nuclear warfare, and that not enough respect was given to the scientific knowledge that had helped Britain win World War 2.

It is possible that his argument may have contributed to the swing in perceptions of the 80s and 90s, where the sciences and fact based studies and career paths were the preferred option to those with ambitions of career-ladder-climbing and financial success.

Jumping back a few centuries, to the Classical Greek period, philosophy was seen as the mother of all sciences; as a subject covering scientific and intellectual understanding of the world.

It seems that, as humans have evolved, it has become more important to favour one over the other, based mostly on their ego value and perceived societal stature. So, are we now seeing a return to placing equal value on left and right brain capabilities?

And if so, how do we educate our children? Any parent will tell you how challenging it is to choose mainstream academic schools vs those deemed more alternative and “creative”.

Where do we place the value?

Education has favoured the STEM subjects in the past 40 to 50 years. The “clever kids” studied science, technology, engineering and maths as a path to guarantee future success and today, we are living in a society that is more technically advanced than ever before.

But we are also living in a society where humans have more of a face and a voice and more power than ever before, and demand a human discourse between business, governments and the people.

This is where fact-based study fails, in that its focus falls on learning facts about facts and their application to known norms appearing in business and society. The disadvantage is that students of these sciences are not well enough equipped for a world where predicting the unknown, and being comfortable with this concept, is becoming an invaluable skill, and they are not taught an ability to adapt.

Should we not then place more value onqualities like the ability to think creatively, to problem solve, to generate ideas, to research and analyse? To understand our human behaviour better, to self-improve, and to build the skills to adapt to the conversation that social media engenders?

But, and here’s the BUT, how do we do so without denigrating the study of the sciences? And still understanding its shortcomings in our new world?

Neither works as well without the other

Steve Jobs said, “It’s in Apple’s DNA that technology alone is not enough – that it is technology married with liberal arts, married with the humanities, that yields us the result that makes our hearts sing.” He also said that, “…creativity is just connecting things” and that “the broader one’s understanding of the human experience, the better design (users) will have.”

The education mandate should be to bridge the divide with the integration of these knowledge bases and strive to improve the ability to relate on a human level and to adapt to this fast-changing world.

How rapidly is the world changing?

A 2017 report by Dell Technologies says 85% of the jobs that will exist by 2030 have not been invented yet. This means that the world will require a workforce that is adaptable and understands the need for constant training and learning.

The speed of knowledge sharing and information as a commodity, with the rapid advancement of the Internet Of Things, highlights the need for humans to adapt and evolve quickly. This need for adaptation has once again brought to light the debate about which field of study may be superior to the other.

While, in the past, there may have been a clear winner depending on the zeitgeist of the time, the winners today are those mastering flexibility, educational and professional resilience.

In 2015, the World Economic Forum released the most important skill sets for the Fourth Industrial Revolution. 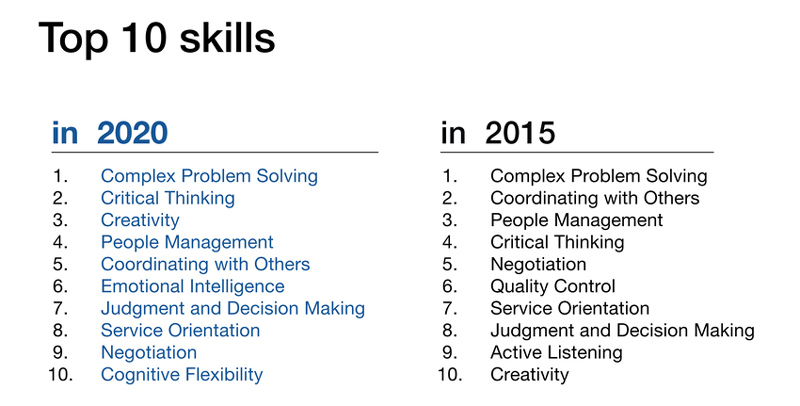 What to do with the scary monster that is Artificial Intelligence

Accepting that the purpose of AI is to improve and potentially replace some human intelligence, the way forward is for humans to develop the skills that are more difficult or even impossible for computers or robots to replicate.

If scientific intelligence was the competitive advantage , then creativity and and emotional intelligence are the competitive advantage now.
According to the Harvard Business Review, meta-analytic studies reviewing 50 years of research suggest that personality traits such as curiosity, extraversion, and emotional stability are twice as important as an IQ score, which has historically been the benchmark for predicting leadership effectiveness.

Before we completely panic about the apocalypse of robots taking over our lives, consider the qualities of humility in leading people, and the ability to relate on a human level to the daily stresses of work life.

A leader in any organisation or business unit is also responsible for creating, upholding, growing, entrenching and driving the company’s vision and value set within an organisation. A strong leader is also responsible for instilling confidence and assurance that the company is heading in a strategically appropriate direction to ensure relevance, company integrity and stability. This leader needs to be able to communicate with empathy and clarity their business’s long and short-term objectives.

In our lifetimes, will computers be able to make these decisions with the requisite skills? Handle conflict management or negotiations? Lead a company? Run an HR department?

We have to accept that the Classical Greek philosophers were correct. To build a prosperous future, we need scientists to programme, maintain and define objectives and results for computers, robots and all of the conveniences that the internet has brought to our working and non-working lives.

And I believe that we will need workers and leaders with insight, foresight, intelligence, cognitive and creative skills sets to manage both the robots and the people. Our egos will simply have to accept that neither is superior to the other.

The world wars of the twentieth century shared certain key features that are conspicuously absent from a class of contemporary war often referred to as asymmetric war.

The profit made from war and words

Only 8% of the last 3 400 years of recorded history, it has been claimed, have been entirely peaceful.

When we think of economic doctrines, we tend to think of ideologies founded by names like Marx, Keynes or Hayek.

SCIENCE
A likely successor to the information age

PEOPLE
Bottling water in the desert